CHAOS LETS HER WISHES BE KNOWN....    I CAN NOT LET SIZZLE LOOSE IN TH E HOUSE WITH THE DOOR TO  HER LITTER OPEN IF CHAOS IS IN HERE TOO...  CHAOS IS JUST A LITTLE TOO INTERESTED IN SIZZLES PUPPIES... SHE IS FINE AS LONG AS SOMEONE PAYS ATTENTION TO HER....  BUT THAT IS HOW ACCIDENTS GET ROLLING...  YOU CANNOT GUARENTEE TO PAY STRICT ATTENTION, IF A TREE FALLS ON TH EHOUSE AND YOUR GET DISGRACTED... SHE COULD BE JUST WAITING FOR THAT TO HAPPEN...      SO CHAOS IS IN THE " CONDO"  AND IS BARKING.
MY OLD DONKEY "MARY"  TAUGHT ALL OF US ABOUT HOW PICKPOCKETS WORK...

Mary was always loose in the yard and very sociable like people l to watch what they did whether it's gardening or carpentry she'd be right in the middle of it watching … but she also knew that when cars came in here they often had to unload wonderful things and she would just wait for someone to carry the first bag of dog food into a building the minute they get out of sight she grab whatever else was there and drag it around the yard .

She was also famous for grabbing the corner our tablecloth and running off…  she was an amazing animal and she got that way only be'cause she was totally free to wander . it was for that reason I put an electric wire across the door to the guest house to prevent her from going in there and getting the cereal out of the closets….. the fact that Janine was living here with very young Colby at the time ., that wire got reported to the Department of children welfare and we had a Visitation by two people any other form who drove up the driveway and wanted to know why I had electric wire which was exposed to Colby . they thought I was mildly insane when I said it was to keep the donkey out of the house …. until Mary showed up and stuck her head in the passenger window looking for any snacks she could find in their car ..  Her head was huge and the great long ears made it even more impressive absolutely terrifying these two inspectors ..  I really didn't mind and enjoyed it .

As for Colby touching the electric wire, he learned not to . just as every farm kid learns not to touch the  electric wire. So all of you people who show such great concern for JIMMINEY   hitting the wire near the chickens just rethink it as a learning device

for those of you watching the construction on the chicken coop

I want to transfer the Guinea hen  babies   to the corner of the new chicken coop maybe today depending on who's here to help … they are almost the size of a football so it's time we got them organized and out of the ICU . they eventually will fly over most every fence anyway and will generally be just around the property eating ticks hopefully .. even though for Guinea hens that we've had have seriously reduced the number of ticks I've had to pull off dogs or people so they do work ….they are also extremely noisy .. and very opinionated in the way they March around ..  not unlike Wanda the Jack Russells .   most of the dogs have gotten bored with them as they often fly on top of the tea tent .

today if I can figure out how to get some paint maybe we can get those painted .we really need to get that plywood protected hopefully they'll last as long as the last bunch

in the process of making them a rectangle about 18 inches square was produced .  now I know where all those rectangles came from that we painted and put numbers on them and then tacked THEM   up around the farm at different doors totally at random .

Dogfest September 19th in all probability from 11 in the morning till 4:30 in the afternoon we are going to try and schedule generic activity around the farm on camera .   this will also include meeting some of our recipients if I can persuade them to come . I don't want  everybody here at all at the same time so that we can maintain our 10 foot distance .

and many of the cameras don't have microphones . but I hope to set it up so that you can at least watch everybody doing some of those strange chores we have to do around here in the process of turning out great service dogs .  there is a woman who comes with two children very reliably every day who waters the chickens .  there's another couple the gathers up the trash and recycling to make sure it lands where it's supposed to . many of these things happened without my immediate knowledge but they do happen .. so I'm going to try and get it scheduled so that our camera audience can get a pretty good idea of the details of  raising a puppy .. so of course we're gonna try and have puppy marCHES..  which will be no problem on a nice day that can get complicated if it rains .. how do I get the puppies into the arena for playtime past all the donkeys and adult dogs in the kennel they'd be terrified I'll figure it out

I'm not sure that will change in the next 19 days .

this is one reason we have a lot of golf carTS.

This can be the first call for asking which of our recipients is willing to come with their dog and maybe give a 15  minute interview in the MAIL CALL SETTING   where people could ask questions and you can answer them on camera.  I Will try and plan to have only two people in any one building at anytime .  the best laid plans of mice and men .. we'll be all set unless it rains .. if that happens will do a lot on the arena camera unless ---------we do the oh oh the interviews while sitting in the donkey stall that would work there's like there's a microphone there .--- well this could be fun .  I'm working on it .  We would have to displace the two turkeys currently living there .

This quilt that someone is sent is a thing of beauty.  It is beyond anything we've had here before and the only thing I can think of doing is putting it up on a chicken **** type  type board  AND  "DRAWING IT"    AT DOGFEST... as as we have done with Wayne gretzky's shirt and Bobby orr's book and then just trying to figure this out we could have different colored paper for the different rewards and have all these things in the same CHURNER upper .

So check our website to see what we're doing with that quilt . I WILL TRY FOR A PICTURE--- 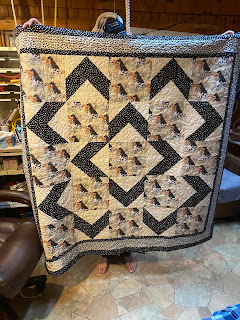 Posted by Service Dog Project at 4:50 AM