scratch that POWER OF POSITIVE THINKING BIT...  IT IS FAR MORE EFFECTIVE TO MANAGE MIS-INFORMATION CORRECTLY... ADVERTISING HAS BEEN DOING IT FOR YEARS. WE MUST ELIMINATE THE CONCEPT THAT MIS INFORMATION IS WRONG..
WHAT GOT ME GOING ???? A COMMERCIALL

A very nice polite lady was on the television saying how wrong it was for people to eat shark fin soup because it was costing the lives of so many sharks and mostly what got used was the Fin---- just cut that right off the top and kill a shark or whatever and she probably with her pleasant matter may have saved one shark ..  that started me thinking if we start the rumor around that it was the FIN of a shark at the  market in    WOOWOO CHINA. That caused the COV pandemic we could save the lives of millions of sharks ..

I’M not terribly fond of sharks .. so how about there is a gland in the nose of an elephant which means that the process of sawing or sanding an elephant Tusk  THE MICROSCOPIC DUST causes erectile dysfunction  IN HUMANS ------you would stop 99.9% of the men in the world from even touching an elephant Tusk AND SAVE ELEPHANTS.

so by all means let's start those rumors around ..  SOUND LUDICROUS??   LOOK AROUND YOU – AT THE THINGS WE ACCEPT AND BELIEVE WITHOUT QUESTION... AND LACKING A REALLY GOOD PRACTICAL EDUCATION.. WE DON’T QUESTION  .Damn it . every time that happens to me----- which is about every 17 minutes----it makes me furious that I didn't think of that before------- because I was too busy worrying about something else . well time has come to put all sorts of misinformation to good use ..good charitable use ----there's plenty already dealing with financially profitable misinformation-- I'll stick to CHARITABLE  USE. ..

No one seems to care anymore whether something is true or not as long as it serves some purpose ---  this is a national disgrace the things they market on TV without the slightest adherence to truth is awful .. if all those things actually cured pulled muscles and arthritis and stuff like that then why are we all hobbling around .???

I KNOW-- THE PROBLEM IS ICE CREAM.

however ........... Having made so many errors in my life ---I have been a student of how THOSE errors are made for years   so when I got the bill from the MASS vet hospital I I couldn't help just glancing through it .. and I may be absolutely dead wrong ----  and I apologize for that---- but we were billed for placing A SECOND  catheter in Bentley there during surgery...... twice???    .. I'm not sure about the anatomy of a dog but it just seemed to me but getting a second catheter in where I was familiar with putting the first one --- I wondered if maybe the second one was going to be difficult.....   so I put a little star next to that charge and READ ON... and the reason I kept going is because WE  STARTED THE ppaperwork.   to cure his problem with his masculine appendages and the ultrasound discovered the same lump that Scarlett had so I said    fine to the second surgery  take that out ----that's OK which they preceded to do .. AND A SUPER FINE JOB THEY DID.

but in the back of my mind I knew damn well that there were things are going to hit the accounting Department which had great potential for error like they're basically with two separate surgeries being done on the one dog and my guess is they had a package bunch of charges that went with the neutering in  ONE package  AND A SECOND “PACKAGE OF CHARGES” THat went with the removal of his spleen....   which may explain why they tried to put two catheters and the same dog the same day a-------they may have a good reason for it ---  I'm not willing to shoot them down ---- but it looked odd and as I went over the rest of the bill it looked odd they charge for absolutely everything sometimes logically more than once....    and somehow it's still $2000 less than the total on OUR BANK STATEMNT  which is AS PAID ------I just I just want the numbers to come out right   OR EVEN CLOSE....So what I intend to do is to write a very apologetic letter and saying that my board of directors has some absolutely impossible account type person who is going to call me on this and see whether they have if I could please explain to them why you put two catheters in the same dog if that was medically necessary ..

-------and at the same time if he had all that methadone----- no wonder  he is happy -----three separate shots involving 2 different quantities all in one surgery ---   is not a complaint but just wondering if a package for the spleen got added to the package for the neutering and there's some duplication in there as far as the accounting Department is concerned – ALTHO IF THEY HAD TO PUT IN 2 CATHETERS MAYBE HE NEEDED IT.;

how they got the ship unstuck. 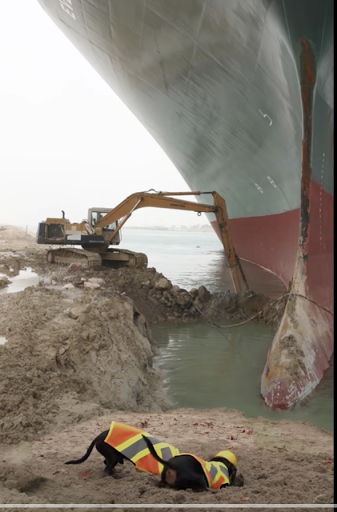 Posted by Service Dog Project at 4:19 AM