question.....  do we have someone in germany who could unravel teh  current rabies restrictions  again about  trying to get a pup  from czech to frankfurt for export.???  i really like the direct flight to boston... we did once try prague to lisbon to boston...i think that  24 hours is too hard on the pups.. so  somehow ...
.i also like the petair out of frankfurt. who are very nice and will go pick up pups... but they could get stopped at teh  german border..  there is a litter due there in may... which could be flown mid aug-- there is one other kennel in denmark who has bloodlines that could work for us.
it jest ain't easy to sort thru it all..... just have a look at the parents-- always lovely dogs.. then hash out the pedigrees which in europe has much more  to study.. and it is  possible to find photos of past relatives  and  show records. -- when did they die and of what??
----
meanwhile .... jiminey.. star of teh day.... went to  the hospital dr appt yesterday and was... darn near perfect. from jumping out of the car and waitng for what seemed hours while i made the only harness i had in the car large enough to go round him... i ordered these.-- my design... from china---mr moon... and because i had to order hundreds, i wanted them to fit everyone, and be comfortable.-- consequesntly all the straps are very long---- a good thing---- but held in place by those-- double back in out impossible plastic double rectangle...it is one of those... if you work hard enough, you can get it to fit pups to jiminey size.. you can not be in a hurry but it will get therer...
you can not be in a hurry to go anywhere now...i went thru the usual door...  not reading the signs.. a little man hopped out from behind a plexaglas screen and told me i had used the wrong door..-- back out and in.. get my temp taken -- mask adjusted to meet requirements....and plastered with a sticker"i have been screened"

i made i t to the elevator where....there is a line... one person ( or family) per elevator... which is not bad for me with walker and tiny  little 150 pound jiminey... Gemini is really good at elevators ----on my left you go in and swing around and he stands perfectly facing the door and panting only a little bit.   at least nowadays I don't have to worry about a door opening and someone standing right in front of it who then takes one look at the dog and has a heart attack.. the six foot spacing is not all bad.. and it gives me plenty of room to inspect the elevator inspection sticker.... one of my favorite elevator pass times..

I wish they had inspected elevators as well as they expected me to get in the place.. I know that Bella and George feel the same way about that... becausr

a while ago before COV...  Bella s assistant and the school was not with her when Bello got on the elevator with a friend and with George... and preceded to get stuck between floors.. Luckily Bella had her phone with her and called her mother to say that she was stuck in an elevator with a friend and George and Rachel didn't waste anytime calling 911 who then took a few minutes to get there-------- one reason we gave Bella the dog is that Bella  does not waste time either turning her head off or filling it full of nonsense--- so  Bella.. being a student of mine----    there wasn't much to do in that elevator except look at the inspection sticker and she found out not only was it overdue for inspection but the sticker that it had was a rejection one..  fire department’s 3 huge trucks arrived- sirens blaring....they did get the door open.. and a janitors ladder got the kids out.... I did not hear the details of getting george out... I am sure that is a "one only "story of that fire department.

all of that was not wasted on bella’s mom... or me.. when I found that it is building inspectors who are responsible for the checking of elevators. Both bella’s and  the one that electrocuted me--- no one knew when that hAD EVER BEEN INSPECTED --- they only knew that the maintenance had been farmed out  TO KONE.  who was the manufacturer of the elevator.. but there was a big disconnect between maintenance and inspections---- obviously.

I can not ... at this time get into a dissertation about my life with building inspectors.. being “only a woman” –

---  moving away  from that fiasco....------all these kids that we deal with have sn atterndant.  --- a person to be with them during school to help them be able to participate in normal school functions---   this is certainly one reason that our dogs are so incredibly helpful because the dog stays with the kid---- as witnessed with Bella in  the elevator ---- her attendant was nowhere to be found ------way back when we first got going we interviewed a kiddo in a wheelchair who had an attendant in school who would constantly leave her sitting in the Hall while the attendant writing to an office or bathroom or whatever ------getting left in the Hall like a sack of potatoes so.. is a common occurrence the kids in wheelchairs.. it just seems so much quicker then they have to get the wheelchair through a door or whatever -----  the problem with that first kid.. was that she was constantly getting left somewhere and did not always get taken to lunch ----resulting. ..  she was very thin.. that was the equivalent a bella getting stuck in the elevator without her attendant-------the fact that--- if a dog did nothing else other than to stay with the child--- even that was going to be better than an attendant..

The other sideline here was explained very well  BY ERICA... Who now has Asher.. she wanted to be a lawyer but was very conscious of the fact that because of her neurological problems people would stare at her she ambled about but now that she has Asher they all look at the dog and not her -----the ultimate result in that was that  as first year law school she and Asher were King and Queen of the barristers ball.. and she has gone on to working in  LAW in Manhattan where she now has full confidence walking into a courtroom.. with the attitude of. “lookout world here I come”..

cov is a money saver.........The possible exception of the infection called Amazon I find that the COV experience has pretty much been a money saver as I say there is that possible exception of ordering widgets from Amazon which will arrive in 24 hours..  I did find in my last go round with Amazon that they now have lockers where you can go and pick up an order and they are many and fairly local so I have yet to figure out if that means you could pick up something within a few hours or is that still at 24 hour deal.. For sheer efficiency I don't know of any system that does any better then Amazon.. I don't know if they ever got involved with the distribution of vaccines but somehow the relationship between Amazon and vaccines did cross my mind when everybody was trying to figure out how to get the vials out.. FedEx is good UPS is good but when you see some of the details of Amazon you gotta wonder is that going to be our third POLITICAL party ???

as they run around with all their electrical vehicles already... and the poor old United States post office still running around and glorified garden cartS

? garden carts????100 years ago when I was driving all over with crates of rabbits or Roosters I tried to buy one of those Postal vehicles which I figured had to get good mileage and had great big doors for carrying cages and things but by the time they give them  up you need more than a Briggs and Stratton engine to keep them  running ---they're pretty beat up -----   that is about the time I decided to give up the whole animals in commercial business.   and settle down to service dogs.

which is which is every bit as challenging.

------
THAT fake meat sausage was not too bad--- when compined with a "easy oover" egg which was still goopey, it was not bad at all/. 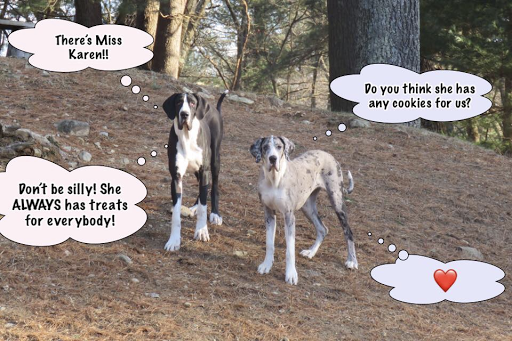 Posted by Service Dog Project at 5:13 AM